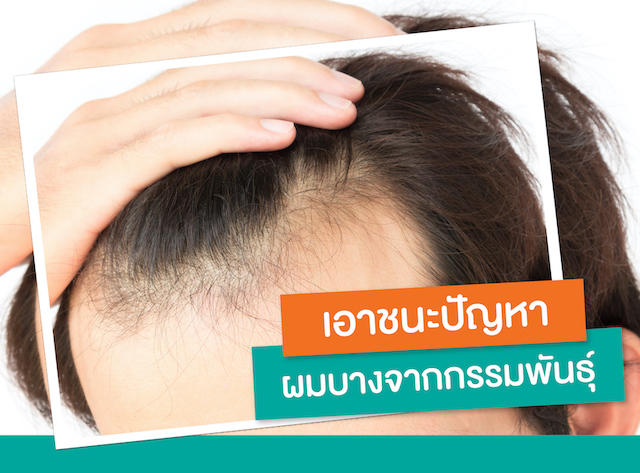 to baldness, there are only a few main causes as I have already mentioned before but 90% of this problem is from genetics. Today, I will tell you the secret tips for overcoming the hair thinning problem from genetics.

This transmission of genes or heredity does not mean that you will inherit this hair thinning from your father or mother only. Perhaps your parents didn’t have this problem, but only you had it, which means that you could have inherited it from your grandparents and you might never have known as well.

The cause of this hair thinning from genetics is caused by increased levels of the enzyme 5α-reductase in the scalp area. Normally, this enzyme converts testosterone or male sex hormones to the hormone DHT (Dihydrotestosterone). So it’s the DHT that causes hair loss and hair thinning because it is a hormone that makes the hair follicles on the scalp smaller, causing the hair that grows to look thin and short, resulting in thinning hair and subsequent hair loss which can be found in women as well but most are found in men.

As for the cause of hair thinning from an older age, it is necessary to mention too because as people get older, the blood flow to nourish the scalp is less, which is another factor that makes our hair thinner, but it may be not as bad as hair thinning from genetics.

Overcoming the problem of hair thinning from genetics by taking medicines

As I’ve mentioned before, most people have hair loss problems from genetics. So the most effective way to overcome hereditary hair loss is taking Finasteride medicine, which works by lowering DHT levels which is the main factor of hair loss and hair thinning so when the level of the hormone DHT is reduced, it will result in reducing hair loss and it also helps to stimulate hair growth as well.

The recommended dose is 1 mg a day and it must be taken for at least 6-12 months continuously to see significant changes. The most common side effects of oral finasteride include decreased libido or erectile dysfunction, but it does not occur in everyone. Only about 2% may experience these side effects.

Hair thinning problems from genetics, the sooner you find that out and consult with a medical professional, the better it is. Don’t leave it until it becomes a bald problem because the cost will escalate too. Knowing this, how about making an appointment for a free consultation with me at the Hairsmith clinic?

Previous post
What is baldness caused by?
Next post
Should a dent on your head be corrected by a hair transplant or a fat injection?